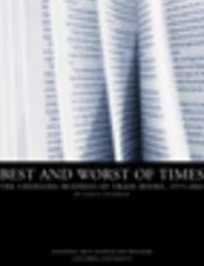 Best and Worst of Times: The Changing Business of Trade Books, 1975-2002 uses interviews, historical research, observational fly-on-the-wall reporting, and a detailed study of bestsellers and prize-winning books to understand book publishing’s present, touch on its future, and give history its due.

Veteran publishing journalist Gayle Feldman carried out this project in part during a research fellowship granted by the Pew-funded National Arts Journalism Project at Columbia University in 2001-2.

During the past quarter-century, book publishing has undergone tremendous change, driven primarily by consolidation, new technology, and a general cultural shift in favor of celebrity and mass entertainment. Consolidation has taken place in every sector, from publishing houses to booksellers to distributors and byond. As for new technology, only consider that twenty-five years ago Amazon.com did not exist. And Oprah, among others, has taught us about the role of celebrity in the lives of books, authors and readers.

Some of the headline-making challenges and difficulties we see in the book business today were already predicted more than a half-century ago. Some of what we regard as “change” isn’t change at all.

Although the past few decades have brought increased pressures and serious distortion to bear on the business, they have also brought previously unimagined levels of opportunity. By studying the wider cultural and business context and the books themselves, this book analyzes these changes and how they have manifested themselves for good and for ill.